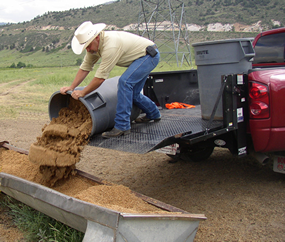 The beer industry uses more than 400 million tons of grains annually and that poses a problem. The brewing process begins by grinding barley or other grains, immersing them in water, and boiling them to extract the sugars and starches. The rich sugary brew is siphoned off to fermentation tanks. Heaps of wet soggy grains – 4.5 million tons! – of what is often called “spent” or “brewers’” grains – are left over. Fortunately, farmers and ranchers know how to use these grains. 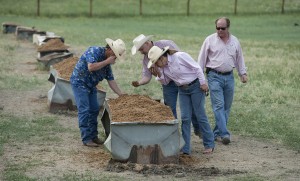 Many microbrewers have solved its spent grain disposal problems by partnering with agriculture, and today ranches like the Rooney Ranch have become vital components for waste disposal for local microbreweries. The Laramie Cattle Company sends the big red truck out several times weekly to pick up the mushy mixes of wheat, oats and barley. The mixture is not as heavy as most grains, yet contains enough protein to increase flavor and build muscle without adding excess fat to the beef.